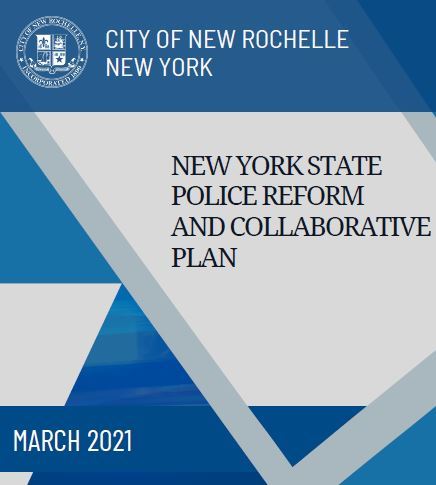 In June 2020, Governor Cuomo enacted an executive order on Police Reform and Reinvention requiring each government entity in New York which has a police agency to perform a comprehensive review of current police force deployments, strategies, policies, procedures and practices and develop a plan to improve these areas. This coincided with a similar request by the New Rochelle City Council, also in June 2020. The Policing Review Committee members were announced by City Manager Charles B. Strome,III on August 1, 2020.

The Committee met throughout the fall and a draft report was presented to City Council at the Council's November 24, 2020 Special Meeting. Public Hearings were held February 9 and March 9 on draft plans. The City Council adopted the final plan on March 16, 2021 and it was sent to the State on March 17. The Governor's Executive Order required a report submission by April 1, 2021.

The Police Reform and Collaborative Plan is intended to enhance the quality, transparency and fairness of law enforcement practices in New Rochelle, while also providing our Police Department with the support and tools necessary to discharge its vital mission. The Plan contains multiple components and recommendations, including the creation of a thirteen-member Community-Police Partnership Board (CPPB).  The CPPB will be comprised of four members from the New Rochelle Police Department, one senior City staff member, one City Council Member, and seven members from the community. The City solicited applications for community members with an application deadline of May 15. Applications are currently under review.